Project Alpha and the Association of University Legal Practitioners are pleased to release today a guidance document for universities and the higher education sector on export controls and the UK Government's student vetting scheme (ATAS).

This document has been prepared with support from the UK's Export Control Organisation and the Foreign and Commonwealth Office. The purpose of the document is to provide a comprehensive yet accessible guide for university practitioners on the export control legislation applicable in the UK and the Academic Technology Approval Scheme (Student Vetting Scheme) which are separate but complementary regimes. This document also contains tools prepared by Project Alpha and AULP members, including policy statements, flowcharts and questionnaires, that can be used by university staff to determine if those controls affect them and how to manage compliance. No specific change in legislation or policy prompted the preparation of this guide.

Who is this document for?

This Guide is specifically targeted at university vice chancellors, legal and compliance departments, research support teams and technology transfer offices. It includes suggested templates for working with individual academics and researchers involved in academic disciplines affected by non-proliferation-related controls, particularly engineering and science fields since it is these areas that are most likely, but not exclusively, to be affected by Export Controls.

Context Controls over strategic goods or technology (collectively referred to as “Export Controls”) have been enacted in the UK for decades, with weapons of mass destruction (WMD) provisions in relation to transfers of technology or technical assistance being in place from at least 2004. Equally all EU countries are required to maintain a system of end-use export and transfer controls. By international law, all countries which are members of the UN have been required since 2004 to maintain a system of Export Controls in order to prevent the proliferation of weapons of mass destruction. This requirement affects not just commercial entities, but applies to all entities (commercial or non-commercial) including universities and researchers that might ‘export’.

The collective implications of these commitments and obligations is that in some cases individual academics in a university may need an export licence from the Export Control Organisation to carry out an activity - failure to obtain one being a criminal offence.

NOTE: This document is for guidance only. It is NOT a statement of law. Before carrying out any activity subject to strategic controls (exports, transfers of technology, provision of technical assistance, etc.) you should refer to the legal provisions in force at the time.

A Decision Tree adapted for local circumstances would help academics make an initial assessment about whether the rules apply and what needs to be done. An institution’s decision tree might be along the following lines:

If you answer “yes” to any of the following questions, take advice:-

Question 1) Was the technology imported from the US? Universities should be aware that in some instances controls from other territories may apply in addition to UK-administered controls. This is particularly common for US technologies, where re-export clauses often apply which prevent not only the goods, software or technology being re-exported to particular countries, but also can prevent it being transferred to or shared with foreign nationals within the UK.

If the technology is subject to ITAR or EAR this may affect exporting and also sharing with researchers within the institution who are from overseas or have dual nationality. These rules need to be satisfied, as well as UK export control requirements. But do not forget to consider UK Export Controls also.

Question 2) The Technology: The primary question that must be answered is whether it appears on the Export Control list. The ECO offers a range of services to help with the process of classification to determine whether the technology is listed. There are three key points to establish here:

Firstly: Is the item or technology specifically designed for military or nuclear end uses?

Secondly: Does the export include encryption software or hardware?

Finally: Do you need to check the UK controlled list of military or dual use items?

Question 3) End use controls: Who are you working with?

The end use controls look at who the end user is and what the end use is. The following list of questions may help you establish an end use or end user issue that you need to look into further.

Even if the item, technology or software is not listed in the UK Consolidated Lists, a licence could also be required if the exporter knows, has been informed or suspects there is a WMD end use.

1. Basic awareness – to help researchers understand if they need to know more about Export Control. (Note: This flowchart does not ask researchers whether their goods are controlled. It is intended for use as an awareness raising tool only.) 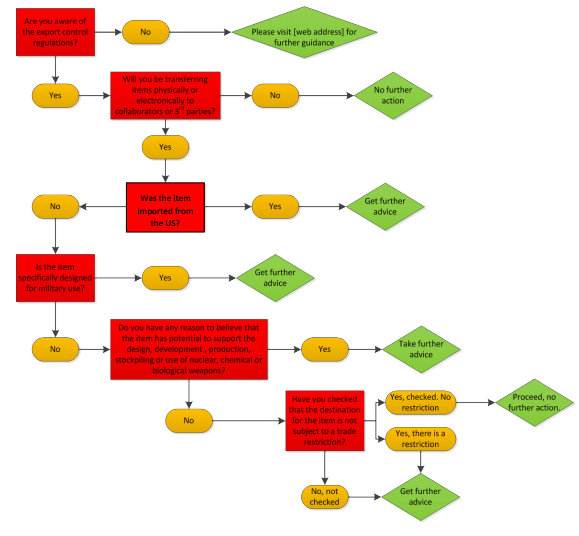 2. When do the UK Consolidated Lists need to be considered?

This second flow chart on the following page links and cross references to the proposed Decision Tree. "Controlled" as used in this flow chart means the technology is on either

• The Consolidated Military and Dual Use Lists or 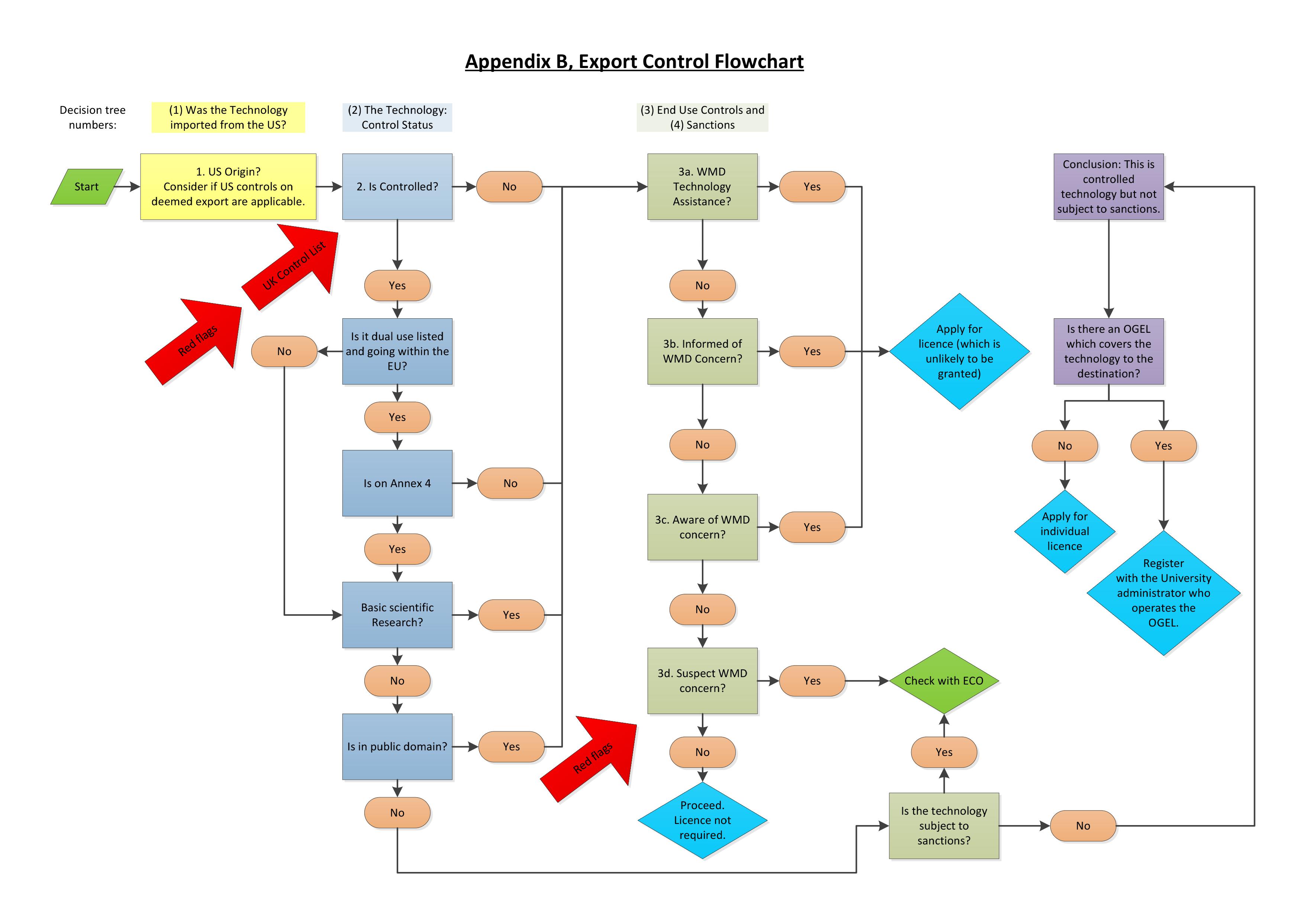 The document can be downloaded at the link below.